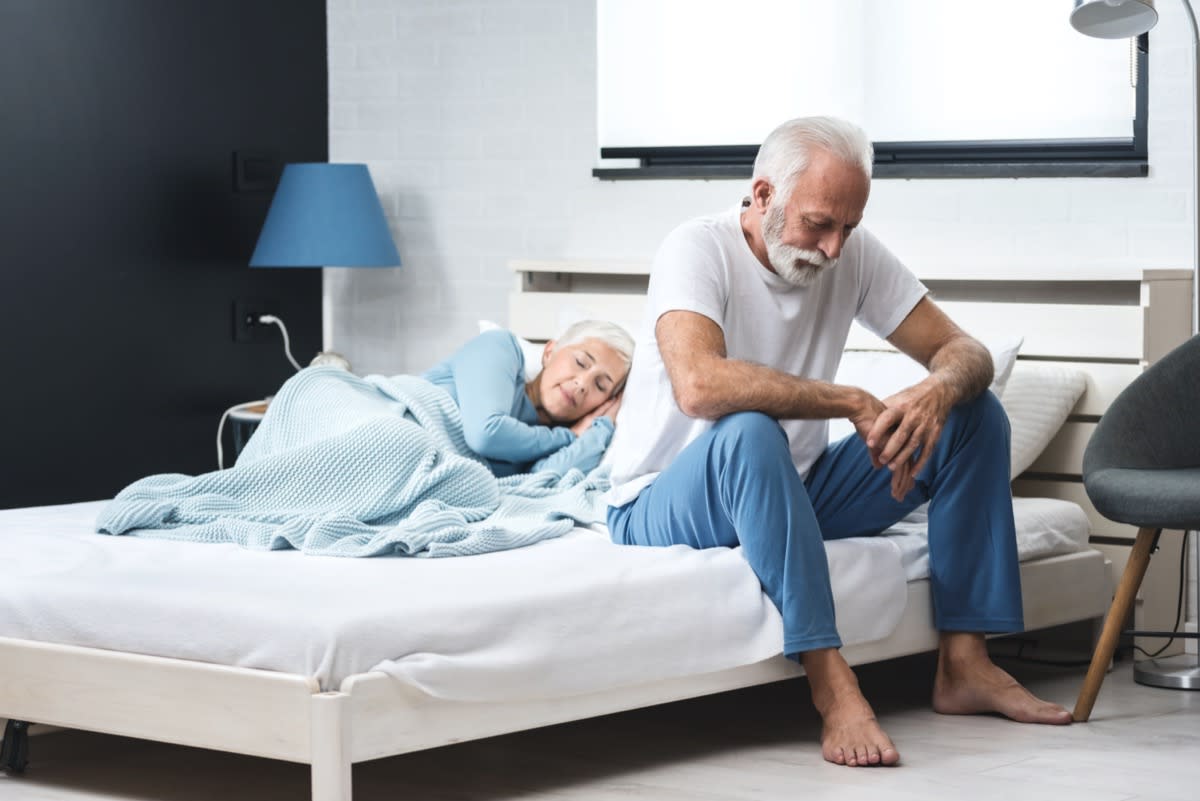 The Centers for Disease Control and Prevention claims there are an estimated 5 million adults living with dementia—and that number grows every year. By the year 2060 they predict that number to multiply to nearly 14 million. A number of health habits have been linked to the memory deteriorating condition, which can often result in early death. Now, a recent major study claims that one specific health habit can significantly up your chances of developing dementia and dying earlier. Read on to find out what it is—and to get through this pandemic at your healthiest, don’t miss these Sure Signs You May Have Already Had COVID.

The study, published in Journal of Sleep Research, found that older adults who struggle to fall asleep and wake up frequently during the night are more likely to develop dementia and even die earlier from any cause.

Researchers poured through data collected by the National Health and Aging Trends Study (NHATS), which involved a sample of 6,376 Medicare beneficiaries during the years of 2011 and 2018. They focused on the highest risk category, those who said they had sleep issues “most nights or almost every night.”

“In each year, dementia was determined by either self-reported diagnosis or performance on immediate and delayed recall word and clock drawing tests, whereas all-cause mortality was determined by proxy. We conducted Cox proportional hazards modelling, adjusting for age, sex, marital status and chronic condition,” the study authors explained.

RELATED: 7 Signs Someone is Getting Dementia, According to Experts

Those who reported awakening in the middle of the night often and struggled to fall back asleep had a 56 percent increased risk of early death and 39 percent of dementia.

Those who struggled with both falling and staying asleep experienced the highest risk of both, 56 percent increased risk of dementia and 8o percent of early mortality.

“Our findings demonstrate that reported difficulties are prospectively associated with an increased risk of dementia and all-cause mortality among older people,” the authors concluded.

RELATED: Things to Never Do After Age 50, Say Experts

Another Big Benefit of Sleep

Keeping dementia at bay isn’t the only benefit of getting enough z’s. According to the U.S. Department of Health and Human Services, sleep benefits include improved immunity, weight management, reduced stress and mood improvement, a clearer mind to improve performance at school and work, better decision making abilities and a decreased risk of accidents, and a lower risk of serious health problems—including diabetes and heart disease. And to get through this pandemic at your healthiest, don’t miss these 35 Places You’re Most Likely to Catch COVID.

Dorado News
A judge has granted National Highways an injunction against protesters who have been blocking parts of the M25, Grant Shapps has said. The order, which will come into effect later…

Dorado News
Binance, the world’s largest cryptocurrency exchange by trading volume, has fallen to regulatory pressures again as it announces the discontinuation of cryptocurrency futures and options trading in Australia, the 6th…

DEAL: Sorare raises $680 million in Series B funding round